Every Tuesday I take Dad (in-law) out for morning tea to give Mum (in-law) a bit of a break from his shenanigans (Alzheimers really is a bugger!)  Lately we go for about a half hour drive in the country up to a little place called Clare to a lovely little cafe called 'the Windmill Cafe'.

It's set in the grounds of Claredale Pastures - the old Burdekin Agricultural College which was sold by the Government quite a few years ago, went into disrepair and then bought by a local agricultural family to bring back to life.  It's one of  Dad's favourite places as it takes him back to 'the farm' and great memories of the past.....and it fuels his belly...... 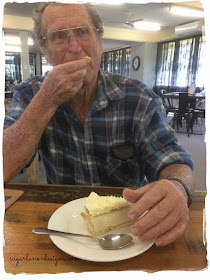 After our morning tea this week, we went for a little wander out the back to check out where the bleating was coming from. 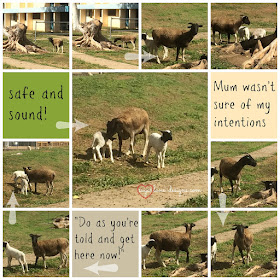 Just at the back of the cafe were a few sheep with their lambs, and one VERY protective mother was giving me the evil eye...I think she might have thought her littlest lambie was going to become lamb chops!    Hard to believe it's winter and people down south of the country have their fires burning and are rugged up....we are having daytime temps of 28 degrees C. and nighttime ones of between 14-21 degrees C.  and NO humidity.....it's bliss in the tropics.  I think I've worn a jumper only once or twice so far this year.

After our wander around we headed for home.  On the way out, through the grounds we saw a family of curlews, a bird native to Australia with a very eerie high pitched wailing at night.  Normally you see them in family groups of two or three but we counted at least 15 in the undergrowth of the trees lining the road.

They are night time birds too so hard to see them during the day, that's when they do most of their sleeping but this lot were out and about.   I just love the nature in our part of the world... we are blessed aren't we?.

After dropping Dad home to Mum, I headed home to catch up on jobs and walking to the front door I witnessed another nature display... 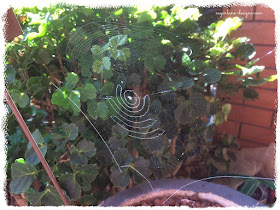 This little fella had been hard at work right at my front door....great inspiration for quilting I think!
But after the housework......

hope you've had a wonderful week too....
many sugary hugs xox  :o)